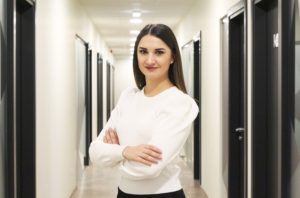 Augustė Bajorūnaitė has been carving the sky of the United Arab Emirates for more than four years. The work of a flight attendant takes her to the most interesting and unexpected places in the world. Since September, a new venture has appeared on Augustė’s agenda – Vilnius, Kazimieras Simonavičius University, where she started studying aviation management remotely.

How did it happen that you chose a job of a flight attendant also known as a dream profession?

I never thought of working as a flight attendant as a dream profession. I was working in the real estate sector, while browsing on Facebook, I noticed an announcement that a new crew team was being hired for United Arab Emirates airlines. I thought I would try. I didn’t set high expectations for myself; I was relaxed. Maybe that’s why I passed all the selection stages quite easily and went to Dubai as early as next week. Everything happened very quickly. Thus, began my career as a flight attendant.

All days are different. The day and night have no meaning in this work, such as one morning I travel to Australia, the next morning to Dubai. If we have domestic short flight, we fly and return home, but if we have an international flight, we have 2 days off in an another city, and this is enough time to explore the new city, but lack of sleep and the so-called Jet lag sometimes is a challenge.

Also, we should always be well prepared and ready in neat uniforms, hairstyles and makeup before each flight. We can’t turn blonde to brunette overnight, such experiments with looks have to be forgotten.

Maybe you’d like to share an interesting incident that happened during flight that passengers never knew about?

There have been no serious or critical events in my practice yet. There were a few minor cases when we flew to Tanzania and found ourselves right next to a spinning whirlwind. We had to turn a few wheels before the weather changed and we could land.

There are some funny situations when dealing with passengers from different cultures. If we fly from Moscow, we have to monitor the amount of alcohol people consume. One passenger, who had multiple alcoholic drinks, slept so deeply that his awakening was only possible with the shouting of Russian army teams.

The most interesting thing is to watch the passengers flying to Mecca to perform Hajj (a pilgrimage of Muslims that takes place every year). After a certain distance to Mecca, the captain informs the passengers and people start washing and wearing religious clothes called Ihram. From that moment on, flight attendants cannot touch passengers. We also change into formal wear ourselves and thus pay our respects.

Your job is interesting but at the same time risky, maybe it influenced you to think about prospects in aviation, or changing your career direction? What prompted you to choose distance aviation management studies?

Work is really fun and engaging but not for a lifetime, it would be too hard to work in such a stressful mode. Therefore, I started thinking about what I would like to do in the future, and I realized that I really want to stay in aviation industry. I started to think about higher studies but working in such a job makes it very difficult to work and study on campus on permanent bases. I was wondering how I could manage this, but luckily, I discovered distance Aviation Management studies. 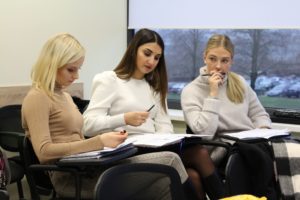 How do you assess your choice today, is work and study compatible?

I am very happy with these studies. Firstly, because it is very easy to combine work and studies: lectures are recorded, so you can join and listen at any day and hour. Teachers are not only academics but also practitioners, which is very important because aviation is a very specific field. Co-students are also from all over the world. I recently flew to Bangkok, where I met a classmate living there and working for FL Technics, and later we met in lectures in Vilnius. The third important factor was price. Compared to the Asian and European universities I have considered, the tuition fee offered by this university was the best.

I would recommend this study program first to those who already work in the aviation sector, as it is much easier to understand all the processes that take place in aviation when you have at least a minimum basic knowledge of course, I recommend distance learning to those who have a strong determination and willpower, because there will be no professors or classmates nearby during the lectures, you have to be independent and take the responsibly for yourself.