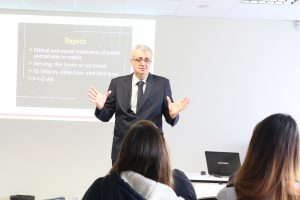 Assoc. Prof. Dr. Sabahudin Hadžialić is a professor at the Faculty of Media and Communications of International University Travnik (IUT). In the framework of the Erasmus + mobility, professor held a series of lectures on intercultural communication at KSU. Our conversation spins about communication, different cultures and countries.

What role does the communication itself play in a modern world?

Some politicians, economists and media people would like to say that their profession is the best in the world. What they say is the most common thing and everybody should obey that. The thing is that they forget interdisciplinarity of the meaning. It means that all of them should interact. That is a communication form. Communication means interaction. Interaction means understanding. Understanding means consensualism and consensualism means peace.

How did you take an interest in the intercultural communication?

What are the most important things we should know when working with people from different culture?

First, we have to ask ourselves some questions like what I would like to accept from them and what I do not want to accept. The future is in mutual understanding, finding consensual formula that we are all humans and we are all red under our skin. I usually say that nation is a part of the history. We just need to wait for the end of the history.

How cultures are divided? Could you give us an example?

There are 10 different points for that: social background, culture, education, tradition, religion, population issue, gender issue, stereotypes, even ecology etc. There is nothing better than differences in the cultures. It unifies us. You and people from other culture may disagree about something. However, when you go back and think about it, you might find some their ideas that might be interesting and they may rethink of something yours. For example, I did my homework and I found the information that people of Lithuania are the less empathic people in the world. It was a research done. However, I found all the people that I met here to be more than that! They are so friendly and open.

Culture itself is a precondition for everything in the society. Do you know that 10 percent of earnings got from bread sales in Sweden are invested into culture? Swedish know that people with developed cultural and media literacy will be developed in a sense of better human beings and they will interact with others. That is the future. That is why I always say that religion must be love within the culture. By that, we will approve ourselves and have interdisciplinary approach. 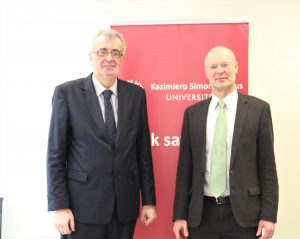 Do you have any insights about Lithuanian culture during your visit here?

Yes, it is not my first visit here. When talking with students, I found out that you are so open. I did some research on the streets. I knew some things but I asked if passers-by could help me. Everybody was so helpful and very open! If you said “ačiū” in my country, I would say “bless you”, but in your country it means “thank you”. Those differences between cultures are so inspiring!

Do notice any differences or similarities between people in Lithuania and Bosnia and Hercegovina?

First, I would say that differences by the area does not exist. Despite the fact that we are in the south and have high mountains. You are high on the earth but you are not on the high level above the sea. For example, Sarajevo is about 700 meters above the sea level. It is general in Bosnia, except south part Hercegovina. People in Bosnia and Hercegovina eat less meat than you here. These are just the small differences. Despite that, we are all the same and we are all humans.

The differences between cultures for me are the advantages.