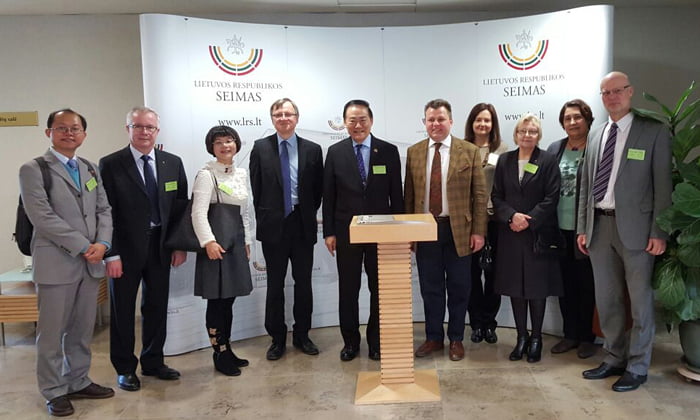 International research project team which gathered in Vilnius, the capital of Lithuania, was welcomed by the host of the event, Prof. Dr. Arūnas Augustinaitis, the Rector of the Kazimieras Simonavičius University, as well as by HE Mr Gary Ko, Head of the Taipei Mission in Latvia, and by Mrs Virginija Langbakk, the Director of the European Institute for Gender Equality (EIGE).

International Workshop was initiated and led by the Vice Rector of Kazimieras Simonavičius University Mr Andrius Tekorius and the Member of the Academic Council of the University Assoc. Prof., Dr. Laima Andrikienė. Both chairmen of the Workshop visited Taiwan in December 2015 under the invitation of the Taiwanese Ministry of Foreign Affairs. International Workshop in Vilnius was financed by all universities mentioned above and co-sponsored by the Taipei Mission in the Republic of Latvia.

During the Workshop Dr. Jolanta Reingarde, the Expert/Analyst of the European Institute for Gender Equality, presented the Gender Equality Index, which has been created and calculated by EIGE for all EU Members States and some candidate countries. Dr. Reingarde outlined explicitly the methodology and possibilities of the potential implementation of the Index. Participants of the Workshop discussed in details the creation and calculation of the Gender Equality Index of Taiwan. The Work Programme for 2016-2018 presented by the KSU Project Coordinator, Assoc. Prof., Dr. Liutauras Labanauskas was discussed and approved.

On the 26th of February the participants of the International Workshop visited the Parliament of Lithuania and met representatives of the parliamentary Taiwan Friendship Group, Dr. Mantas Adomėnas MP, Dr. Egidijus Vareikis MP, and the Vice Chairman of the parliamentary group Mr Valerijus Simulikas MP.

The same day, Lithuanian, Latvian and Taiwanese scholars visited the headquarters of the European Institute for Gender Equality (EIGE) in Vilnius. Visitors were introduced to the EIGE structure, ongoing and already implemented projects, they also visited EIGE’s Information and Documentation Centre.

The European Institute for Gender Equality is an autonomous body of the European Union, established to contribute to and strengthen the promotion of gender equality, including gender mainstreaming in all EU policies and the resulting national policies, and the fight against discrimination based on sex, as well as to raise EU citizens’ awareness of gender equality. As an autonomous body, EIGE operates within the framework of European Union policies and initiatives. The European Parliament and the Council of the European Union defined the grounds for the Institute’s objectives and  tasks in its Founding Regulation and assigned it the central role of addressing  the challenges of and promoting equality between women and men across the European Union.

Kazimieras Simonavičius University and three Taiwanese universities, i. e. National  University of Kaohsiung, National Pingtung University of Science and Technology and the National Kaohsiung University of Applied Sciences, are associated for the fourth year and their cooperation is based on the Partnership Agreements or Memorandums of Understanding signed in 2012.